How to repair a lawn damaged by the cold weather

Your lawn can come out of winter with the colour and liveliness of a rubber chicken. So if you want to give it a flying start to spring read on.

Commonly known in the turf industry as winter kill, winter desiccation is a general term for turf dying in extremely cold temperatures. Severe moisture loss occurs when water in the grass is lost faster than it is replaced.

Desiccation can occur on turf any time of year, but winter kill happens for a variety of reasons during the cooler months, including crown hydration, low temperature kill and ice encasement.

No turfgrass is immune to winter desiccation. You can tell it is occurring as the turf grass leaves will start to appear yellow and look dead. This can sometimes lead to the roots and crown of the plant also dying. This is due to it not being able to replace the moisture loss it endures in extreme temperatures.

Frost damage is the most commonly seen issue in Australian turf grass in the cooler months. Whenever grass becomes colder than the surrounding air on cold, clear nights this is when frost can occur.

Frost damage causes the leaf blade to lose colour for a period of time but will rarely kill the turf. It almost always recovers to 100% once the weather warms up again in spring.

Warm season turf grass varieties are most susceptible to frost damage, but cool season grasses are not totally immune in severe temperatures.

Turf will recover by itself naturally from frost damage, but you can minimise the damage by staying off your frosted lawn, irrigating the frost off or using a natural turf grass colourant such as ColourGuard.

One of the main factors why turfgrass suffers from winter kill (dying off and turning yellow in freezing temperatures, not that common in Australia as it doesn’t get cold enough) is crown hydration.

Crown hydration normally occurs in late winter/early spring when the days and soil temperature warm up. The turf starts absorbing moisture again, and then is hit soon after with freezing temperatures, so that moisture that hasn’t drained away freezes on the turf.  Ice then forms on the crown of the plant and causes the cells to rupture, which kills the plant.

Again, not so common in Australia is snow mould. Snow mould is a disease caused when snow sits on turf grass for a period of time.

This will generally only occur when the ground isn’t completely frozen, but still has snow sitting on it. Snow mould causes circle patches in lawns ranging from a couple of cm to 30cm in diameter. There are two types of snow mould, grey and pink. Grey is less damaging and will only burn the leaf of the grass. Pink is far more severe and will kill the crown and roots of the turf. Both grey and pink snow mould are unique diseases as they can survive the summer months under the ground or in plant debris.

Returfing or reseeding: This is the most common method for repairing severely winter damaged turf. Returfing is best done in spring once the weather warms up. This involves removing any dead grass matter, reconditioning and levelling the soil and then laying turf over the top.

Reseeding can be done during the cooler months if it is a cool season turf and involves the same process as returfing, but involves broadcasting seed as opposed to laying turf.

Feed: You should always fertilise your lawn coming out of winter once the weather warms up. Fertilising will provide vital micro and macronutrients to your turf lost over the harsh winter months. Nitrogen rich fertiliser will also help your lawn to repair any damage which may have occurred.

Dethatch: Dethatching when the weather warms up is a great way to generate new growth in your lawn and to remove any dead matter that may be there after winter damage.

Dethatching can be done on all warm season varieties and can be done using a scarifying machine. It can also be done by lowering the height of your mower and scalping your lawn. Always be sure to only scalp right to the ground if you have a rhizomatous turf variety (roots in the ground) like couch, kikuyu or zoysia. If you have a buffalo lawn, do not scalp as low and make sure you can still see turf runners on top of the soil.

Now you know how, transform your lawn from fowl to fabulous. How wet is too wet for mowing? How to Tackle an Overgrown Lawn 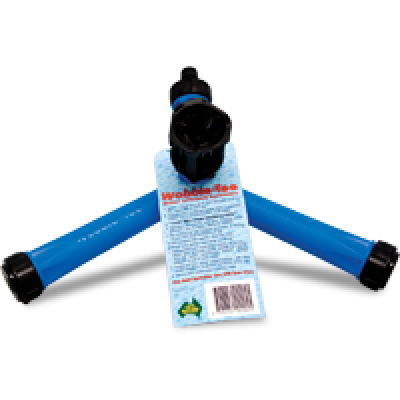 Water your lawn efficiently with the best sprinkler you’ll ever own.